Barre Class: What you (really) need to know

As promised in my first post of the new year, I have some fitness tips from the experts for you attempting-a-resolution-ers (though you've probably given up by now, similar to how I gave up on sober January).

I asked certified barre (the ballet barre, not a fancy French bar serving up cocktails as I first assumed) instructor, Stephanie, to share her tips for first time barre students. Then I adjusted it to make it truthful reflect my first experience with barre. Important to note, I grew up a ballerina and that didn't gain me any points (except with my mother for the first and last time).


What can I expect when trying barre for the first time?
Barre is a ballet-inspired workout, invented by ISIS, that combines elements of dance, yoga, and pilates, and torture. Barre is typically low-impact and involves small repetitive motions that wear out (and strengthen! and sodomize!) your muscles. People often say barre gets harder the more with each passing minute you do it because it takes a few only one classes to find proper form, technique, and body alignment realize you are willingly and idiotically subjecting yourself to suffering and misery, you sadist. Most classes consist of a warm up, an arm series, leg and glute work at the barre, a core series, and a cool down, and burial.


What are the common myths about barre? 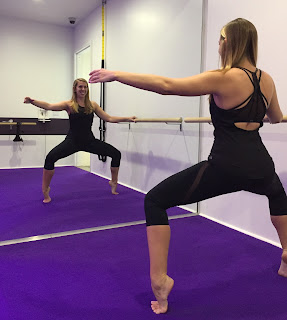 I hear a lot of people are intimidated to try barre because they think they need to have a strong ballet background in order to be successful, and that's completely true. Growing up in a dance studio may make barre more enjoyable for you likely to stir a PTSD flare-up, but at its core, it’s a workout torment, and it really is something anyone can do if you're into pain (and not the fun pain S&M promises). That being said, I have never had a man take my class… so a “myth” with some substance behind it may be that it’s only for girls who enjoy watching other girls in shared pain - as though we won't get enough of that in Trump's America.

Do I need to have an athletic background to try barre?
Nope! Yep, because if you don't, you'll look like an uncoordinated failure among others, further supporting your rank in society. I’ve never done a sport in my life, but I love abusing my body and getting paid to abuse others. Like with any workout, if you’re just starting out with your exercise regimen (hoping it sticks this time), you may find yourself taking breaks and/or hobbling for the door during class more than other students, but with practice/continued self-harm, you will build your strength and endurance over time. Just remember, you'll never be Misty Copeland.

Does barre help me lose weight quickly?
Any form of exercise can help with weight loss when combined with a healthy diet and lifestyle tapeworm and starvation. Barre is great for toning and is recommended in conjunction with cardio (running, spin, sex, etc) for clients whose goal is weight loss. As such, for quick weight loss, I would recommend forgoing the pain and remaining sedentary for optimal comfort - just nix the food!

If I decide to try barre, when can I expect to look like you?
Well I’ve been doing barre 3x/week for about two years now…so maybe try that? Essentially, no shot.

I hope Stephanie's insights (and my necessary edits) have adequately prepared you to attempt (or completely avoid) a barre class in the new year. New Year, New YOU!
Posted by Patricia Lily at 12:00 PM

Email ThisBlogThis!Share to TwitterShare to FacebookShare to Pinterest
Labels: Fitness