HOs for the Holidays

I've never been one for group sex because my mom occasionally reads my blog. I suppose I understand its allure should everyone involved be forced to wear paper bags over their heads, but I'm a middle child and a bit of an attention whore (not that it's obvious) - I'd be terrible with all of that sharing. The same can be said for group text.

We've all, at one time or another, sent or received mass texts. Often, these texts are conveying plans or delivering necessary stories to a group specific to the situation.  Too often, these texts are holiday well wishes from lackadaisical "friends" who fail at any attempt to hide their indifference toward you (I reserve that for family). They send out the generic "Merry Christmas!" or "Happy New Year!" text, and don't mind that any response to their message will generate unwanted reply-alls. While annoying, these people aren't the worst of them.

Fortunately, I make these "worst of them" friends easily (and all-too-frequently). This collection of people are the group messengers who send seemingly specific messages and forget (or are too incompetent to realize) that anyone with an iPhone can see each person included on the message. I provide evidence of such people: 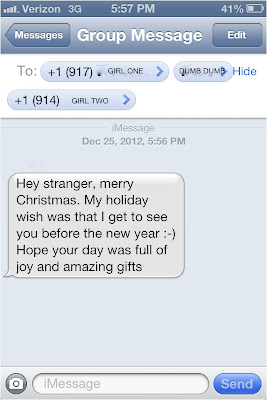 The first dunce in question (screenshot at right) sent a "hey stranger" text to me and two other (assumingly) girls (best Christmas present ever). While I can understand you might have more than one "stranger" in your life, it may be viewed as poor taste to let them all know collectively that your wish is to see them before the new year. Ladies and gentlemen, how not to get back into a girl's pants.

Does the smiley face bring light to the situation? No, because this particular smiley is even more apathetic than the questionable group inclusion - could he not have troubled himself to include a sweet yellow-circle-face? Perhaps the one with heart-eyes? I think I could've gotten past some of his negligence had he put forth a bit more effort in the smiley game.

Girl One was quick to call out this no-excuse-because-you-have-an-iPhone-and-should-realize-the-grave-mistake-you-made idiot with a  response of "Group message?" Good work Girl One, but your swift reply ruined my chance to respond, "Hey stranger and other strangers, when is everyone free to get together before the new year?" Instead, I had to go with "↑ (thumbs up emoticon)," reflecting my appreciation of Girl One's comeback. Ugh, so inferior. Girl Two was an hour late to the party with, "Who is this? lol" - she had an hour to come up with something more creative. In retrospect, I'm glad Girl One beat me to the punch. Had I elected to send my initial response, I could have been stuck hanging out with some witless dullard (I find enough of those at the bar as it is).

Likely, the best part of this entire situation is the fact that he had the balls to call me (who calls people?) the next day. I assumed my "Hey stranger" greeting upon picking up would've directed the conversation appropriately (i.e. him owning up to his oversight), instead, he acted as if nothing happened. Maybe he thought I failed to recognize that it was a group chat since my only reply was an up-arrow followed by a superthumbs up? So, did I call him out? Nope. Why shoot down a sure before-the-new-year thing? 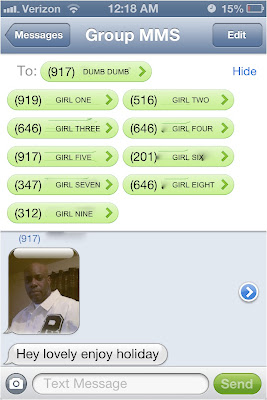 The second best Christmas gift I received came from Delsean (name unchanged because...well...because I can).  Delsean (pictured at left) and I had the pleasure of meeting this past November. I was elbowing my way to the bar (what else is new), and he was the only thing that stood between me and my life source an adult beverage.  He started talking to me and I let it happen because I was thirsty (and the whole attention whore thing). While waiting for my libation, he asked to see my phone, and like a child in need of a toy to distract them from bothering you, I handed it over.

Between growing impatient waiting for the bartender to return and worrying about whether or not Delsean would take off with my phone, I exchanged forced conversation pleasantries with him.  He mentioned something about calling himself from my phone (great), I smiled my preprogrammed smile, my drink came, and I was off to another section of the bar.

Later that night, Delsean reminded me that he stole had my phone number with a "hey lovely" text - his signature apparently. He has texted me nearly every day since, with zero response from me. His text assault will be glorified in a post to come, but his Christmas text was much too exceptional not to share. His Christmas group text, that is.

Delsean chose his favorite ten girls (Yay, I was included!), and sent out his sweetly sincere holiday text.  I get it. I completely understand - he wanted to streamline his holiday wishes and not forget any of his HO, HO, HOs.

Not only did he demand that I enjoy my holiday, he helped me do just that by including a suave seflie. Thanks for reminding me why I never respond to your texts, Delsean, and thanks for the awesome Christmas present.

Ah, the single life. Jealous?
Posted by Patricia Lily at 12:00 PM No comments:

When I mistakenly set my alarm for a Saturday morning

Posted by Patricia Lily at 9:00 AM No comments:

When my boss asked me how I got a black eye

Posted by Patricia Lily at 2:00 PM No comments:

If you're reading this, it's likely you're not doing either of the following today:
In that case, congratulations - you're doing 12/12/12 right (so as long as you're not standing in line to get "YOLO" tattooed on your body).

I get it - I understand why couples think it's a great idea to get married on a day like today.  I made quite the push last year to wed on 11/11/11, and I was fortunate enough to be turned down by every stranger I approached outside City Hall.  The thing is, couples getting married today are doing just that - getting married. The only marriage I would tolerate today is if it were that couple's 12th marriage. Now that's serendipity. 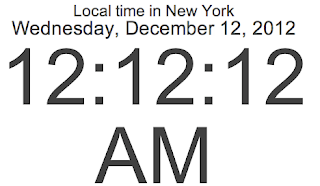 Many people marrying today are rushing it for the date. Marriage should never be comparable to sex with a stranger - it should never be rushed. The only activity we should habitually rush in life is liquor intake when running from life's problems into an ex. Marriage should be solicitously reflected upon in hopes that you mindfully consider backing out of it. Now, divorcing someone to celebrate 12/12/12 - that I can get on board with. Not that I think divorce is a celebratory occasion - who am I kidding - of course it is. You're breaking free of the chains one of you weren't entirely sure about in the first place. It's just too bad you didn't have the balls to follow through with your uncertainty on that unpropitious wedding day.  Additionally, today is a Wednesday - it's tacky to get married on a Wednesday (unless the reception speeches reference "hump day" numerous times).

Having a baby today? There's nothing wrong with having a baby today, it's having a baby at all that troubles me. That requires something I hate more fervently than last call: selflessness. Yuck. Unless you're birthing this child for organ harvesting - oh, come on, not the vital ones - I'm not Satan.  I'm simply talking a kidney here, sliver of a liver there - things that could one day prolong your existence - those things are permissible. However, like marriage, organ-harvesting childbearing must be thoughtfully deliberated. Do you really want your matching-DNA-that-makes-for-the-perfect-organ-donation ruining the body you gave up food pizza for? Ruining the vagina you Kegeled tirelessly to keep favorable? More importantly, do you really want to give up your life as you've come to know it for a child that will grow to leave you for a mistake marriage of their own, for mistakes children of their own? Babies? Pass.

So, today, I raise my glass twelve times to you. Instead of partaking in some of life's worst greatest moments, you're drinking a dozen beers while diverting your attention from the movie Twelve by reading the novel Twelve with "The Twelve Days of Christmas" playing in the background, or you're drinking a bottle of Twelve Wine  thinking about what the Street Fighter character, Twelve would do to Steve Martin's disrespectful children in Cheaper by the Dozen.  I'll probably just watch twelve episodes of Sons of Anarchy, and buzz one out to Jax twelve times.  To each their own.

The only people that are doing today better than you are those partaking in the following:
Yes, the little shit-makers that are less than a day old are already exponentially better than you are.  Many of them will grow to accomplish great things, feats that you couldn't conjure up no matter the level your Adderall addiction spikes to.  More of them will grow to hate their mothers' 12/12/12 sacrifices completely as they perfect a1080 on that greased up pole hoping the few measly singles they scored don't drop out of the stringed cloth that has been delicately placed to hide the outbreak their Valtrex failed to subdue.  Keep it up 12/12/12 children.

I might add, that offing yourself to accomplish the latter activity, does not count - don't embarrass yourself by trying either.  Just think about how awkward the "R.I.P." posts on your Facebook page will be; no one wants your birthday reminder popping up postmortem.  Live for Facebook if for nothing else. In summation, gentlemen, take those freshly shaved upper-lips of yours (as much as girls find pedophiles sexy, I'm glad Movember is over) and have a drink to celebrate not getting married to the girl that stopped giving you blow jobs after you put a ring on it; to celebrate not having a baby that you're not entirely sure is yours.  Ladies, take your questionable self-esteems and daddy-issue-riddled fashion choices out on the town to celebrate not sleeping with the same man for the rest of your life; to celebrate not worrying about society's standards of a quick baby-weight drop, not to mention that nipple chaffing situation.  Celebrate today like the asshole you are by doing some good solely to make you feel better about yourself.  Donate to Sandy Relief; donate to Big Brothers Big Sisters; donate to (read: like) me.  It's your best last-ditch effort to wake up on Jesus' birthday and find something other than a fat hairy old dude in red porking your mom coal under the Christmas tree.  And, not that you asked, but the only thing on my Christmas list is a pack of rechargeable batteries - apparently they don't last forever.

When a married friend's profile pic is from their wedding day

Posted by Patricia Lily at 3:00 PM No comments:

Posted by Patricia Lily at 5:00 PM No comments: