Whenever I begin to consider visiting my hometown, I remind myself of the goings on of Las Vegas.  Not the strippers or the gambling (even though I mastered both early in life) - more so, the goings on of the quaint two-story house in the middle of a cul-de-sac of a master-planned community - the house I grew up in. Home sweet home (allegedly).

During my last visit, over a year ago, I had been enjoying my vacation away from the big city reminiscing with my siblings and old friends. Of course, all of this reminiscing took place at bars or pools with bars - as is necessary. The final day of my trip, my sister and I returned to our mother's house during the wee hours of the morning, dodging her glares and piercing judgments as best we could.  After a few hours of recovery and fluids (the nonalcoholic kind), we were able to pull ourselves together to head back out and meet our friends for some day drinking quality time.

We braced ourselves for the task at hand and walked outside to the car. With a quick click of the remote entry button, the doors unlocked and my sister opened the passenger door as I walked around to the driver's side - I had requested to drive seeing as I was a Manhattanite whose feet acted as a main form of transportation powered by Jameson instead of unleaded - it had been too long. Apparently, I wasn't as recovered as I had thought I was (similar to Lohan's lack of understanding of her readiness to accept sobriety) because it wasn't until I sat down in the driver's seat that I noticed my ankle monitor - my ankle monitor in the form of a club.  Yes, the steering wheel club invented to thwart would-be car thieves from operating a vehicle.  We were being treated like common criminals. Our mother had placed this bullshit device on the car before leaving in her club-less vehicle. It was a Sunday and, as a product of a strict Catholic upbringing, I immediately attempted to use this to my advantage. Grandma would see things my way; she'd have my back. Standing in the driveway, I enthusiastically dialed her up, woosah-ing with every dial tone to calm my frustration. Similar to enjoyably aggressive intercourse suddenly surprising you with a mistimed hip thrust resulting in penetration of the wrong opening, I was shocked and angered when my mother's voice answered the call. A quick glance at the screen of my cell phone confirmed a correct dial. "Put grandma on." As soon as gma picked up the receiver, I began explaining the situation. "Hi, Grandma! I'm not sure if your daughter already told you what she did, but there is a club on the steering wheel, and we can't get to mass." I figured this was a perfect story. I simply mispronounced "the bar" as "mass" - a common mistake, especially if you're born and reared in Las Vegas.

"Well, why don't you walk to mass?" Grandma, you snake! You know we're Catholic. We're not a couple of Orthodox Jews on our way to synagogue who must abstain from operating vehicles on Shabbat. What do you think this is? Additionally, it's sweltering at over 100 degrees outside and you want us to walk five miles? Immediately, I realized there was no winning in this situation. My mother had already polluted her mother's thoughts with images of us shooting tequila in little-to-no clothing (in our defense, please note it was over 100° outside).

Our mother's plan worked. She successfully circumvented our attempt to enjoy life further - story of my life. We were left with no other choice but to retreat back into the house and finish out our sentence. Fortunately, as the one of her four children who moved 3,000 miles away and emancipated herself years prior, I was not under her control nor the control of some device that acted as a dedicated deterrent. Single mothers sure are creative in their attempts to materialize an absent father.

Soon after this inconvenience, my sister wised up and hid the club as soon as she located it in the master closet. Too bad our mother presumably bought in bulk. She produced a fresh club each time my sister assumed she had successfully outsmarted her. One can never outsmart crazy.*

Yes, I plan on keeping a cab service on retainer the next time I visit.


*The use of crazy in this instance is meant in the most loving and respectful way.**
**In case my mother reads this.
Posted by Patricia Lily at 12:30 PM 3 comments:

Getting Naked is Dangerous

Brian and I were thoroughly reveling in our last night in Miami.  Stumbling out of the club, bidding adieu to the South Beach nightlife, we made our way down to the beach to enjoy one last free pedicure the sand always so cordially provides.  We passed a few people on our stroll across the shore while the remnants of waves splashed at our ankles; some homeless, some couples, all enjoying the moon's reflection on the dark water (OK, so the homeless person was sleeping, but it's likely his glazed eyes smiled at his surroundings before he passed out).  When it came time for us to travel back up the beach toward our hotel, we exchanged a knowing look.  "Let's do it," was the general consensus.

Removing my jewelry, dropping my purse, and losing my dress as quickly as I lose my dignity at bars, I skipped into the ocean allowing the salty waves to try their hand at sobering me up.  Occasionally squinting at the dark shore from the water, whose sand mirrored the 3am night sky rather than the hotel lights of Collins Avenue, we kept an apathetic eye our belongings. We gleefully splashed through the ocean whilst screaming inside jokes from our trip, our way of immortalizing the good, the bad, and the inappropriate before we had to hop in that death trap that is a South Beach cab to the airport a few short hours later. 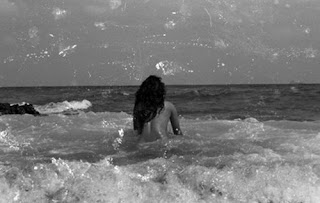 Brian and I were in heaven.  That is, if you can be drunk, naked, and swimming in the ocean in heaven (I'd consider sinning less if that were the case - yeah, I know, that's unlikely).  In those moments, I was the happiest a person can be.  Don't believe me?  I snapped and texted that picture just before stripping down. Pure, unadulterated joy right there.

As Amanda Bynes famously said, "All good things must come to an end." We couldn't remain carefree floating in the ocean forever (though we considered it).  We were forced to reclaim responsibility and make our way back to shore.  Slowly trudging through the waves, unacknowledged goose bumps started forming.  We felt nothing - clearly the brisk water did little in the way of moderating our inebriation.  Where the water failed, however, a war veteran succeeded.

Our shoes were all that remained of our belongings - my $2 flip-flops and Brian's flashy Adidas sneakers.

Vocalized panic started erupting from Brian's mouth while my internal panic manifested itself in nail-biting. All I could think was - which of our friends were playing a prank on us.  Too bad all of our friends were at least 1,300 miles away.  This couldn't be happening; we were leaving for the airport in two hours.

We noticed some people about 50 yards down the shore.  I told Brian to go ask if they saw anything.  He insisted that I come with him.  I shot him a piercing look and motioned to my hands fully occupied with covering the goods (or the OKs - whichever), and responded that I would not be joining him on this endeavor.  Besides, I was busy chomping the last of my manicure off.

Moments later he was back with the bleak news that our useless neighbors had seen nothing.  He checked inside his shoes for the second time and felt something that the hysteria had previously caused him to miss - his phone and wallet. He had tucked them into each of his shoes before jumping in the water.  While his sense of alarm began to dissipate, mine was still violently attacking me as I stood naked on the shores of South Beach.

We tried calling my phone - it was off.  This war vet was good.  Oh, I suppose I should explain how I knew the thief was a war vet. Simple - the only way he could have stolen our things unnoticed is if he had been army crawling through the sand (important to note: this theory was later endorsed by a friend who watched a man do exactly that in an attempt to steal his friends' belongings during a similar night's swim in South Beach). So, either this person was a war vet or an infant in its pre-walking stage.  I'm going to stick with my gut on this one.

Thankfully, Brian's phone proved rather useful with its flashlight app as he was able to locate our clothes about 100 yards up the beach. I assume the vet determined our duds were neither his style nor size.  Flip flops in hand, I threw my dress back on and we agreed it was time to head to the hotel to sort things out.  En route, I called and made the necessary cancellations to cards (at least I had the sticky magnificence that is the material used to adhere credit cards to the trivial piece of paper enveloped and expedited for your convenience to look forward to - God, I love that stuff - so underrated). I then dialed the boyfriend who so wonderfully answered what could have been an annoying drunken rant and, after following my sloppy directions leading him to my passport, sent me a picture of my last available form of photo ID.  Not sure if TSA would have let me anywhere near my gate without something showing I was who I claimed to be.

The front desk printed my passport and called up a cab.  I regretted finishing off every finger nail because the return flight was close at hand.  It's pertinent to mention that I'm a nervous flier. Ignore the fact that my father was a Naval Fighter Pilot and my mother served as a flight attendant during my youth - I should be most comfortable in the air - but as we all know, I'm most comfortable in a dive bar surrounded by my friends, Jameson and self-doubt.  I digress.  What was already a stressful situation was exacerbated by that damn vet.  I suppose I should be thankful for his service, though. Ugh.

Overall, it seems I have become a bit too comfortable neglecting protection; specifically, protection when it comes to nudity and my goods.  I suppose getting naked in any capacity requires a form of safety, but it's always a bit more exciting when safety is ignored - amiright?
Posted by Patricia Lily at 1:00 PM No comments: