I had wanted to get a dog for a long time, and decided that once I got my own place in the City I would do just that. That's the worst best part about being an adult - you can do what you want (but really, someone please help, tell me what to do!). I found the perfect studio - enough space to live comfortably and a part-time doorman to judge me keep me honest. I hurriedly signed the lease to triumph over the many people next in line to sign, and completely disregarded my puppy plan. I finally inquired about the canine rules of the building upon move-in and found that they hate dogs had a strict no dog policy. As an extremely indecisive person, I have to appreciate when decisions are made on my behalf, and in this case the verdict was in - no dog for me for the two-year lease term.

Within those two years, I began dating Steven.* After those two years, I moved in with Steven. We were too busy figuring out how life works as a couple to think about additions to our home. However, a puppy was still in the back of my mind.

After a year in our first apartment as a newly affianced couple, we moved (for the first time since my Manhattan residence began) away from the east 200s block to a perfect one bedroom near the river. As soon as we signed the lease, I knew this would be my chance at puppy parenthood - the apartment came with a large private backyard!

We settled into the apartment for the next year, and then, early last summer we began discussing dog adoption. We incessantly scoured Petfinder, sending each other pictures of our favorites. Like most decisions that include more than one person's opinion, finding a dog we both liked was a challenge. Steven prefers gypsy looking dogs - the longer their dog goatee the better, while I appreciate pretty dogs because I don't live in Brooklyn I'm not confident enough to make up for their shortcomings. 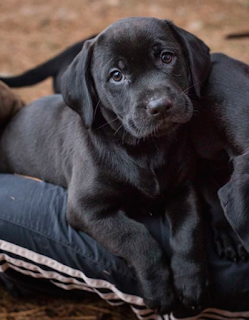 Finally, we found a dog we both loved - a hound mix ready for a home - for our home. I mean, look at that face. That's a dog I can take to the dog park with my head held high (unless I'm nursing a hangover - that's why the backyard is key).


We applied immediately, and I provided the contact information of the people I knew would lie about me best for their three required references. Once they all replied with glowing reviews (in the spirit of full disclosure - one which I wrote myself), the adoption agency called us to schedule a home visit. That's right, a home visit. I can go buy six great danes from a dog store right now, and no one is coming by my place to confirm it's not a closet. However, if a home visit was the final box to check before Elvis came home to us, come on over after I put away the sex swing.

[You may have noticed the puppy acquired a name - good catch. I named him Elvis for two reasons, (1) he's part hound (ahem: ♫ you ain't nothing but a hound dog ♫), and (2) Steven and I are both from Vegas. It was too perfect, and soon, we would all be one big happy multiracial family.]

I joked with Steven about the home visit because we both thought it was ridiculous. "Do you think it's just to make sure we're not operating a meth den?" I asked him. "Well, if it is, we better hide the meth." Steven's a forward thinker, it's one of the reasons I love him. After we cleaned up the meth apartment, we made an appointment and the next day, an adoption rep, with her pit-mix in tow, dropped by to sniff out the drugs.

She was a big fan of our apartment, and upon touring she joked "these visits are just to make sure you don't have a meth den." (We clearly employ the same writers.) We saved the backyard tour for last, and, after suggesting we adopt more than one dog with this type of space, she told us we passed the final test.

"Great! When can we pick up Elvis?" I eagerly inquired.

She then ruined my life explained their adoption process, which goes as such: step one - submit an application, step two - references, step three - home visit, step four - disappointment. Essentially, we were now officially approved to adopt one of their animals, and we could go to any of their events and leave with a new family member. And then I got punch in the fucking face - ELVIS WASN'T EVEN AVAILABLE ANYMORE. She had little to nothing to say in regard to the relevance of applying for a specific dog on their site. "Get out of my house," I screamed (in my head).

Since losing Elvis, I've been in mourning and our dog search has been dispassionate at best. Like being driven to drink, I've been persuaded to BUY BUY BUY. No dog shop or puppy farm is going to get my hopes up - If I pay, I play. Sure, Sarah McLachlan's "Angel" taunts my thoughts, but as an adult with abandonment issues, I can't survive another doggy disappointment. Does it count as shopping if someone else buys it for me? I didn't think so.

As such, I would like to ask Santa for only one thing this year - Elvis. Find whichever unworthy, meth-concealing family got him and pull a Grinch. Bring him to me. Or, if Steven's reading this - I'll take a dog (a good looking one) instead of all of those gifts under the tree. If you didn't keep the receipts, I'll take both.

*When I decided to start blogging again, I had a talk with my fiancé about what name he would prefer I use for the blog since I figured I would complain about mention him often. He offered the following suggestions: Mitch, Eucalyptus, Wiley, Sylvester, Reginald, Mohammad, Lars, or Simon ("as in 'Simon Says,' get it?"). As with most things, his opinions went ignored.
Posted by Patricia Lily at 12:00 PM