My brief hiatus can be chalked up to aggressively celebrating the birth of the great US of A, and, more importantly, the birth of yours truly.  Unfortunately, both fell on awful days this year.  Don't get me wrong, I will celebrate my country any day of the week, but a Wednesday - come the fuck on.  And then to immediately follow that up with celebrating my favorite thing - me - on the worst day in the history of the world? I felt like I was stuck in the middle seat to Australia between a three-years-pregnant Jessica Simpson and, well, my mother. It was clear that 25 really wanted to finish me off raw and hard (something I might usually otherwise enjoy).  There was nothing else to do except puke-and-rally my aging ass all the way to 26, and that, I did. 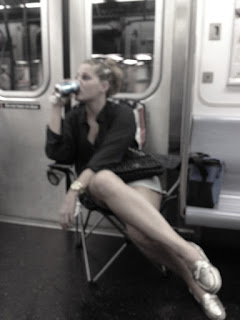 I celebrated the 4th as I envisioned America would, if America was a single 25-year-old professional with student debt, a Manhattan studio apartment, questionable self esteem, and a healthy appetite for alcohol, living beyond her means.  I drank beers, watched some fireworks, "Ooh"-ed, "Aah"-ed, and repeated the process a few times sans the fireworks. More impressively, I convinced my friends to join me on a subway ride that would turn into a two hour affair.  Because nothing screams "America" like a drunk chick sitting in a fold up American flag chair, chugging a beer, and toting an easily handled cooler on the subway.  Before you judge me, know that I checked, and Goyard doesn't make mini coolers...or fold up chairs.

After making many a friend on the 4th during its well-documented joyride, I enjoyed two days off from work.  While I don't mind being at the office, what with its free air conditioning, I was glad to have a bit of a reprieve.  Especially since I ended up celebrating America in a similar fashion to that of my first night of college, my 21st birthday, and many other less momentous yet fully inebriated occasions - by holding my own hair back whilst enjoying dinner for the second time.  Have I mentioned I'm single?

A few days and many libations later, after finishing a 15k road race that boasted a finish line in a brewery, I found myself loving 25 less and less. Sadly, the backlash of the race and its effect on my muscles helped me actually feel older. I was finally ready to swallow the full load of 26 and embrace it head on.  At the stroke of midnight, the calls, texts, and Facebook posts began - nothing a middle child enjoys more than some unearned attention.  Friends and family became eager beavers as they reminded me that I was aging.

The onslaught of push notifications continued throughout the day, keeping my phone at a steady vibrate. In fact, the notifications were consistent enough to replace an item I purchased that only "notified" me sans a pesky voice plan (yes, of course I'm giving a shout out to my vibrator).  Close friends, good friends, and friends that Facebook suggested were acknowledging "me day," commonly misspelled "bday."  All of the love gave me lady wood for the better part of 24 hours.  I was more than content when, at the end of "me day," more persons than not who had at one time or another seen me without clothes on (mistakenly or otherwise) wished me a happy day.

Long story short, my birthday well-wishes got me thinking about sluts, as these things tend to do. More specifically, I started pondering the sex number to age ratio, and concluded that having fewer sexual partners than years lived makes you a prude well adjusted person of the world (unless you're over 30 and that number is zero). Consequently, if you've had relations with more people than years you've been alive, then congratulations you might be recognized as a whore whose morals aren't the only thing considered to be loose. Fortunately, this logic allows one to easily decrease their skank level with age, and for some reason this made me feel better about getting older.  Gain wrinkles, lose a slut tier.  Clearly it's true what they say about getting older and wiser.

In summation, when you realize you've got more past than future, start recycling - and I don't mean paper and plastic.
Posted by Patricia Lily at 12:00 PM

Email ThisBlogThis!Share to TwitterShare to FacebookShare to Pinterest
Labels: NYC Standards of Practice