When you live in the city, you see your fair share of seedy waxing salons. You purchase the Groupon and the Living Social deals assuming they wouldn't support subpar facilities, only to discover the waxing room is a curtained-off section of a secondhand wig store. It takes a few tries before you find a location and an aesthetician you can trust. You have to make sure 1) it's a good wax that doesn't require another thirty minutes of at-home plucking, 2) she wears gloves, and 3) she doesn't judge any odd bruising that she might notice while you're spread-eagle on her table. Fortunately, I found such a place, and Olga has been nothing but great to me. She's quick, easy, and loves to talk - we have far too much in common.

Unfortunately, due to last minute scheduling and time constraints, I missed my appointment with good ol' Olgs last week, and had to settle for something much less familiar. I found and secured a quick appointment on Lifebooker, packed up my desk, and ran out of the office to make my last-minute vacay waxing appointment.

On the way, I passed a 16 Handles and figured it was a good sign, and, if needed, I would treat myself to some Birthday Cake froyo post hair removal.  As I got nearer to the salon entrance, I noticed their classy window decor: a busted neon sign haphazardly flashing "NAIl S." At first look, I thought the foot of the "L" was simply not lighting up, but, as I glanced a bit closer, I realized that they actually made the mistake of writing "N," "A," "I," and "S" all in uppercase while the poor lowly "L" had to resort to lowercase. This was going to be a treat.

I walked in and approached an empty counter; I was the only one in the entire salon. Seconds later, I heard the door chime ring just as it had when I entered. The meth-addled-looking cigarette smoker that I had passed upon entrance was apparently in the mood for a wax as well, that or my purse. She didn't even look up as she slumped past me and took her place behind the counter. Figured. From under the counter, she pulled a Clip-Art-decorated price list that was seemingly laminated in the 90s, what with its numerous bubbles and curled edges. While the services were typed out (in Comic Sans no less, the unqualified intern of fonts), the prices themselves were handwritten on white labels, labels that were stacked at least ten thick. I wondered for a moment if this was a scratch-and-win situation - I was ready to grab a quarter and start scratching until I found a price I liked. Unfortunately, this was not the case. 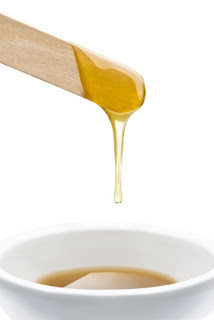 I explained the service I was in the market for, and she surprised me with a follow up question: would you like regular, sensitive, or pain-free? Had I been transported to a Vegas buffet? What was with all the choices? Perhaps I would have ventured into a different category than regular if a) I believed there was actually a difference between the three, or b) they had more exciting names. Rather than "regular," "sensitive," and "pain-free," they should have gone with "fuck," "shit," and "ouch." If that had been the case, I would have probably opted for more than one choice. "I'll take two ouches and one really great fuck please." I wonder if their marketing team is looking for an inappropriate 20-something to join the group? They can't say I don't have any good ideas. I digress.

Ripping out hundreds of follicles of hair from one's nether regions would only be pain-free if there were medical grade tranquilizers running through an IV straight to one's arm - not that I've ever thought about this before. This seedy salon, I was sure of it, did not boast an anesthesiologist on its employee roster.  The pain-free option was a crock of shit option two. And option two - sensitive - was just as ridiculous coming from a salon that waivers on capitalization at first sight. Unless sensitive meant I was going to be cuddled and soothed after, I wasn't having it.

I let her know I was going with the regular wax and with a rather disappointed look, she directed me to the back of the salon, explaining the room I was to look for was just down the hall. Yeah, the dark eerie hallway. I made my way to the back of the salon while my shoes struggled to keep up. With every step came extra effort to peel the sole of my shoe off the sticky tile ("tile" is being generous - it was clearly linoleum). I finally got to the dark city-alleyway-looking hallway and discovered the room she had been referring to. It was hard to miss as it was labeled "1." As if there was a door "2." The only other door in the place looked like a papier-mâché massacre and led to the bathroom. I knew this because its sign read "RES RO M." Fortunately, I'm great at Wheel of Fortune (quite the soft spot for Pat Sajak) and knew where I needed to head should the occasion arise.

I walked into "1" and it was as cozy (and as big) as a uterus- how were two people supposed to fit in here? As per usual, there was a plastic-covered slab bed with the ever-welcoming paper sheet pulled over the top - just as you'd find in a doctor's office. This exists to make us all feel better about the sanitary conditions, but I know better. I was a ripe nine years old when I realized that toilet seat covers provide a false sense of security. I haven't used an airport bathroom since - and I always hover. It's proven more difficult with every passing year and cocktail. Heels and inebriation make for a tough hovering combination. And after seeing what was behind door number one, I'm pretty sure hovering wouldn't have been enough had I entered the door marked "RES RO M."

I went through the usual motions: hang purse, drop trou, grab cell to text friends as a distraction and/or play Sudoku. I hopped onto the tissue-papered table and, in my first 48 hours of sobriety after the nine-day bender, I felt the still-aggressive week-old bruise on my ass. The padding on the table was evidently the same padding used in my 7th grade bra and was not helping anyone. Knock knock. "Ready?" I find it so awkward when they ask if the coast is clear. Are they or are they not about to get all up in my lady bits? And they're concerned that they might find me mid-panty removal? Odd.

"Ready." Wince. As if the wax wasn't already going to be uncomfortable, add a bruise the size, shape, and coloring of the Death Star. Instead of allowing her to discover my wound on her own, I let her into my world as she was powdering my world (nothing brings you back to childhood like having your crotch speckled with baby powder).

"Sorry if I wince more than typical or move slowly, I have a bit of a bruise on my ass," I warned.

Cue me rolling away from her toward the wall, which, at this close proximity, I realized was nothing more than cork board painted white.

"¡Ay Dios mio! What happened mama?" God, I love it when they talk dirty.

I explained to her that this wasn't even the worst of it - it was a full week old. While she mumbled phrases that far exceeded my level of Spanish education, I mentioned it was much easier to deal with when I'm drunk (what isn't?). Then it happened.

Umm, "excuse me?" Her accent was thick so I was sure I had misheard.

"Do you want a shot? I have vodka. I can get you a shot if you want," she said matter-of-factly.

I immediately had a vision of dying puppies as I thought, wow - I'm in the arms of an angel.

"Seriously?" After she nodded as confirmation I quipped, "God bless you."

She left the room, leaving me covered in powder, and returned shortly with a paper shot glass filled with a beautiful clear liquid. At the time, I didn't question her possession of a paper shot glass as I could only focus on one thing - booze.


"Salud," she replied with a bright smile.

Sure, I could've been poisoned from sketch beauty salon "vodka," but I figured, why not? Bottoms up (quite literally).

OK, yeah, it tasted a bit like rubbing alcohol, but it warmed me right up and immediately took my mind off my injury. Hell, I barely felt the actual wax.

Email ThisBlogThis!Share to TwitterShare to FacebookShare to Pinterest
Labels: NYC Standards of Practice