I'm Not That Into You

The battle between being polite and getting your point across can be harder fought than a Lannister-Stark war; often times, it can include just as much blood and rape (fortunately, not as much incest). Tell a person fervently into bedding you that you're flat out not interested and you're an asshole. Courteously respond with vague negative-based maybes and noes and you're a tease. Navigating disinterest is easily one of the more difficult situations in the dating world (right behind STDs and unwanted pregnancy). How do you let someone know you're just not that into them without making their weekly therapy sessions revolve around you and your cold black heart (why's it got to be black?)?

Not too long ago, I was inflicted with the inconvenience of having to let a guy know it wasn't going to happen. I suppose I shouldn't have reciprocated in post-2am-conversation by reporting on my exact location, but that's not important. What is, is that he actually showed up - who'd have thought? So there I was, enjoying an after-hours beer at my home-away-from-home the bar, and Dave drops by. The bar had already closed (it may or may not have been after 4am), but apparently stumbling up to the door and mentioning my name after closing grants one access (and I thought I would never be an important name in this city). I immediately looked to Emma, my partner in crime for the evening (and many other evenings for that matter), and mumbled as clearly as possible, "I'm not sleeping with him; remind me." She did far better than that.

The three of us walked back to my apartment, commenting on the beautiful Sunday morning sunrise. I thought about attending an early mass, but figured it was best I stick to my usual, lazy 7:30pm Jesus Party so as not to get too excited for the consecrated wine during communion. Catholic guilt loves dropping in like a surprise period on a beach vacation (or worse, a hot date - like the kind with food and the guy footing the bill - one can dream).  I digress. 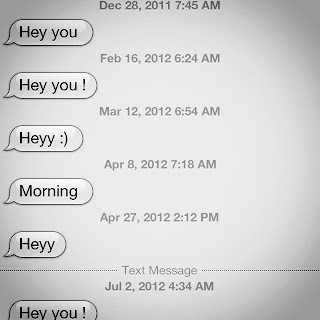 We arrive at my apartment, Dave hops on my bed (confident much?), and Emma and I take to the couch to watch whatever movie we had been pre-gaming to hours before.  I might take a moment to remind everyone that I live in a studio apartment, meaning the bedroom is the living room is the kitchen is the great room is the den is the game room is the theater is the gym...you get the idea.  Dave really thought he was going to get lucky with Emma an arm's length away.  He tried motioning for me to join him as I ducked his advances by adamantly explaining that seeing the end of the movie was of the utmost importance.  Dave wasn't taking the hint (much like a certain gentleman that texts me almost once a month to no reply →).  I determined that I had already used up my fake sleep card and had to instead opt for a fake sick one.  No way would he believe I was too far gone; I managed not even one stumble on the journey home.  I glanced to Emma who was sitting to my direct left and sent her a text.

Me: He needs to leave.
Emma: Whatever you want lol how can I help?
Me: Throw up? Pretend? I'll hold your hair back?
Emma: Now or at the end of movie?

Talk about a wingman - without question she agreed.  She not only agreed, she consulted me on timing.  Never existed a better reminder of how much you love someone.

Immediately, she popped up and ran to the bathroom.  I gave my best shocked/concerned look to Dave and followed after her.  The gagging and rough coughing sounds Emma mustered up were brilliant.  I'm pretty sure had Dave grown curious and walked into the bathroom, she would've actually thrown up - she was that dedicated to the role.  I raced into the kitchen to get her a much-needed glass of water while exchanging ugh-she's-ruining-everything glances with Dave.  She gargled the water and then used it to imitate vomit hitting the toilet water.  A true talent. We were trying our best to hold back our laughter, and she cleverly disguised her giggles into gags. We decided she would curl up on the bathroom tile and I would get him to leave.

Instead of leaving after I had explained the situation, Dave told me we should let her nap it out in the bathroom and he promised to pick her up and put her in my bed postcoital.  Seriously? Well, I had to keep up the charade and explained that I should at least cover her.  I tiptoed back into the bathroom and related his relentlessness to Emma.  The bathroom was no good - she needed to pass out in plain sight.

She shuffled out of the bathroom and crawled into bed next to Dave as his expression shifted from anticipation to horror.  His eyes darted to me pleading that I do something about where she had decided to crash.  On her way into my bed, she mumbled, "My side of the bed..." It was perfect - it had just the right amount of slur with inebriated undertones.  He was sure to head home after that.


Alternatively, he suggested he pick her up and move her to the couch (yes, the same couch that is an arm's distance to the bed).  His persistence was more frustrating than realizing you have to drop a deuce as soon as you step out of the shower. I curled up beside her and whispered not to move no matter what; more audibly, I asked her if we could move her to the couch.  I had to keep up my "I'm a victim, too" pretense.  Emma retorted with a resounding, "If you move me I'll throw up, just five more minutes...five more minutes."  The perfect drunken five-more-minutes-fade-out.  Wow, she was a better friend than I could have ever imagined.

Dave gave up on the much-coveted bed and threw me onto the couch.  I rolled off the couch and got him to leave as fast as Kim Kardashian rolled off Ray J's dick and became famous.  He finally walked out, shoes in hand, like a true Sunday morning walk-of-shame - the shame being he failed to get laid.  "A" for effort, though buddy.  "A" for effort.
Posted by Patricia Lily at 12:00 PM